What you thing about it? 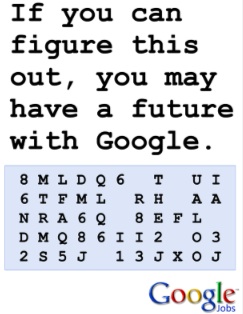 “If you can figure this out, you may have a future with Google.” – nice one. 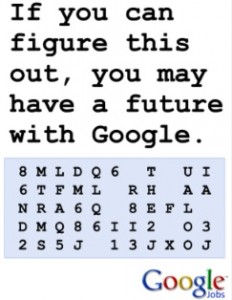 The mysterious event occurred on September 9 in the night sky: many photographers spotted a strange glow coming from the space transportation system, better known as the Space Shuttle.

Naturally there arose many questions. Where? Why? Accident?

But as always, the true is much more prosaic: a visible mark is nothing like dumping the dirty water (urine). Such a bright trace, was due to the large number (about 68 kg) of the substance. So all we have seen quite a common phenomenon, by NASA spokesman. When water getting out to space, it discards into a cloud of tiny crystals and subsequently under the influence of sunlight evaporates and dissipates in space.

Today noticed that at the point where you should be a button «close» fo the browser, there is picture of a young man (Glen Murphy). :):):)

In Windows XP  open any Wav-file with notepad in the folder C: \WINDOWS\Help\Tours\WindowsMediaPlayer\ Audio\Wav, then go to the end of the file and you should find that all  wave files have signature of hacker groups “Deepz0ne”.

So I wonder if there other components in Windows Xp that have problem with copyright?

The calculation includes all published versions of the browser, starting with the first release in 2004. If a user downloads multiple copies for different computers, all of them taken into account. If the user manually downloads from the Web site to update the existing version, the counter is also increasing. But the automatic update does not affect the number of downloads.

Thus, far from the fact that the web browser uses a billion people. Nevertheless, apparently gaining popularity of the application, the former did only a few years ago and today is directly competing with Internet Explorer, by default enabled in Windows.

The bug was discovered by noted iPhone hacker Charlie Miller, who first talked about the issue at the SyScan conference in Singapore. At the time, he said he’d discovered a way to crash the iPhone via SMS, and that he thought that the crash could ultimately lead to working attack code.

But still the experts say that “iPhone Security: Latest Hack Not So Scary. So time will show 😉

SBerry has discovered a vulnerability in Mozilla Firefox, which can be exploited by malicious people to compromise a user’s system.

The vulnerability is caused due to an error when processing JavaScript code handling e.g. “font” HTML tags and can be exploited to cause a memory corruption.

The vulnerability is confirmed in version 3.5. Other versions may also be affected.

Aptana quietly released a new version of Aptan Studio. In the list of good changes :

But one change was actually bad,  and I`m talking about removing iphone development plugin. I hope that Aptana developers will change they decision and in next update will add this necessary plugin.